Another Nail in the Canto Coffin | Happy Jellyfish

Another Nail in the Canto Coffin

Ahhrghhhh … When I set out to make Cantonese a world language, I was mostly concerned with Hong Kong and its people – the way they look down on Cantonese (their own language!!!) calling it a “street language” a “dialect” and advising foreigners to “learn Mandarin instead.”

After the handover in 1997 though, I’ve noticed that the written Cantonese has been gaining ground, being increasingly used in adverts, as captions and headlines in newspaper and magazine articles, and when quoting interview objects.

What I didn’t realise – or rather, not didn’t realise but didn’t see as quite so urgent, was that the central government has been working steadily, openly as well as behind the scene, to eradicate Cantonese completely.

I got my first inkling of this a few years ago when I walked into my local branch of HSBC and was greeted by a bint whose job it was to stand at the entrance going “Ni hao ma!” to everyone who entered and sporting a big badge saying “Promote the usage of Putonghua!” Here I was in Hong Kong, whose official language is Cantonese, being talked to in a different language by a local person with whom I had been communicating in Cantonese for years, just because an edict had come from on high that everyone in the bank should be quacking in awful Mando for the whole month.

A month or so ago I mentioned here how the authorities have been destroying the older areas of Guangzhou to “celebrate” (or whatever) yet another grandiose sports event on the mainland: The Guangzhou Asian Games. That’s only to be expected; after all there’s nothing like a sports event to spur the mainland government on to undertake city destruction on an enormous scale.

But now it gets worse. Much worse. Last week I was interviewed on the phone by Ming Pao, a Chinese language newspaper in Hong Kong, about my views on the eradication of the Cantonese language. For behold: To “enhance” “national” “harmony” etc. (I’m running out of inverted commas) – the government has decided to close down Cantonese language TV and radio stations. I was too shocked to speak coherently to the poor journalist; I think the gist of what I managed to gurgle forth was “Kill them all!!!”

I quote the article in its entirety:

“Cantonese is in trouble in its birthplace.

Already threatened by the influx of migrant workers to Guangdong and unfavourable government policies, the ancient dialect is the target of a recent proposal to switch the language of prime-time TV programmes in Guangzhou to Putonghua as November’s Asian Games approach.

This has triggered a new round of the debate in the province about “cultural strife”: just how much must local ways of life be given up in the name of national unity?

GZTV has nine channels, and most of its programmes are broadcast in Cantonese – spoken primarily by people in Guangdong, Hong Kong, Macau and some parts of the Guangxi Zhuang Autonomous Region . It is also widely spoken by overseas Chinese around the world.

The proposal says GZTV should use only Putonghua on its two main channels, to cater for Putonghua-speaking visitors and athletes at the Asian Games. (My italics, as are those below) The idea met with strong opposition from Guangzhou residents. But GZTV has decided to go ahead.

Mainland media quoted an unidentified GZTV executive as saying that although some concessions would be made to Putonghua on the two main channels, not much would change overall, as the idea was not popular in the areas to which GZTV broadcasts most.

The Guangzhou PPCC’s own survey last month shows more than 80 per cent of the 30,000 respondents – two-thirds Cantonese-speaking and one-third Putonghua-speaking – opposed the official plan to switch to Putonghua in TV programmes.

When GZTV previously switched some programmes to Putonghua, ratings dropped and it was forced to switch back to Cantonese.

With 110 million people, Guangdong has rapidly become the most populous province. But most of the recent increase has been migrant job-seekers, and now half its residents do not speak Cantonese.

Guangzhou, the provincial capital, once spearheaded the mainland’s economic reform. But rivals such as Shanghai and Beijing have caught up and even surpassed it. The dialect seems strange to outsiders.

So local authorities see the Asian Games as a chance to remake Guangzhou’s image and reaffirm its status as one of the mainland’s key cities.

But the cultural preservationists have a voice – a loud one. Some have called for the protection of the dialect, in thousands of online posts against the proposal. They say regional dialects are being swamped by the relentless tide of Putonghua.

There is a two-pronged attack on Cantonese – internal migration on the one hand, and the government policy of a “common language for a unified country and harmonious society” on the other, says Jiang Wenxian , a Chinese-language specialist at Sun Yat-sen University.

The 1982 constitution enshrined Putonghua as the official language. Beijing’s resolve to ensure all Chinese speak it has led to bans on dialects at many radio and television stations. Television stations in Guangdong are allowed to broadcast in Cantonese only because of the proximity of the province to Hong Kong.

“It is national policy to promote Putonghua,” Jiang said. “The government will not stop us from promoting local culture, but it is not going to support us. Guangzhou now boasts 14 million residents, and half of them are new settlers and do not speak any Cantonese.”

But the city’s residents who do, such as clerk Luo Bihua , advocate peaceful coexistence.

“All young people in Guangzhou can speak Putonghua. But the dialect presents the Canton culture. We have to support and use it in daily life,” she said. “There are already dozens of television stations broadcasting in Putonghua on the mainland.

“Please let us enjoy our culture in our hometown.” “

Bastards! But this is not unexpected. While hiding under a cloak of “openness” (reporting outbreaks of deadly diseases only a few months after it became clear they couldn’t be hidden) and a new-found kindness (premier Wen Jiabao patting children on the head and shedding tears during the Sichuan earthquake in 2008) the communist party has never stopped consolidating its grip on power. Many say it has never been more powerful and had more deep-reaching control of what’s going on in the mainland than now.

So it must irk them no end that there are millions of people who, right under their noses, keep speaking a language unintelligible for the dyed-hair, black-suited brigade in Zhongnanhai. Yes of course, many Cantonese speakers are communist party members. But Guangdong has always been a rebellious province going its own way. And that’s dangerous in China.

Now, if everyone were to speak Mandarin and only that, think how much easier it would be to keep them in check?

And so, armed with the excuse of “national harmony” the government has continued its relentless drive to bring everybody to heel. Inner Mongolia, Xinjiang and Tibet, wherever there are Han Chinese, the local people have been forced to learn Mandarin or else.

Now the dreary power-mongers  have cast their hungry eyes on the last outpost of non-conformity: Guangdong.

Only a naive person will believe that this shutting down of the Cantonese-speaking media is for the “benefit” of outsiders during the Asian Games. When the games are over, of course the Mandarin prime time broadcasts will stay firmly in place; then eating their way into the non- prime time slots as well, until there is no Cantonese language broadcasts in the province.

And when that is done, guess what: Hong Kong will be next.

With our dear un-elected useful idiots at the helm, don’t you think we’ll see ever more “Speak Mandarin, you know you want to” campaigns, cloaked in “useful” “good for the economy” “compete with Shanghai” “win-win” meaningless drivel.

Soon we will also, like the mainland, have trains called “Harmony” and Hong Kong government officials singing the praises of dull, un-inventive, communist speech-making, imperialist Mandarin.

Many Hong Kong people have been actively trying to get rid of Cantonese for years, without really being able to speak Mandarin. It used to be English that was top of these self-hating weaklings’ list, now it’s Putong Bloody Hua.

This kind of linguistic and cultural imperialism used to work well in the 18th and 19th centuries.
Nowadays, people know well that just because you can learn to speak one language doesn’t mean you have to ban/look down on/belittle your own.

I’m Norwegian. I learnt English, German and French at school. When I came to China, I learnt Mandarin first, and then Cantonese. Does that mean I should get rid of Norwegian???

What are these people ON?? Oh, I know what. A total power trip.

But it won’t work. Cantonese people in Guangdong will, if anything, crank up the Canto. The more stations that get shut down, the more they will speak their wonderful, ancient but always fresh, vibrant and totally cool language.

For that’s what those fuckers up north have against Cantonese, apart from the fact that it irks them so that they can’t understand it and therefore won’t know if someone is plotting against them, isn’t it.

Cantonese is cool and happening; something Mandarin hasn’t been since 1949.

The Eagle has Flapped Away | Happy Jellyfish

The Eagle has Flapped Away

Do you live in Hong Kong? Have you lived here for a number of years? (Any number higher than, say, one?) Then you must already be starting to get sick of people leaving. 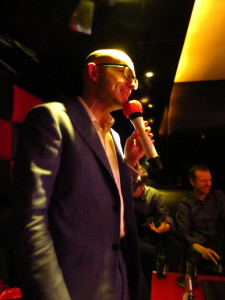 Now it’s Frank’s turn (Frank is also known as Fei Yeng, Flying Eagle) and last night he was sent off in style in a karaoke bar.

I had to go home early but not before I had shown him my going-away song, called oh, Fei Yeng or something:

I am pleased with this song and every word in it is true. Big thanks to Quentin, Linda, Jo, Alan and all the other who contributed their time, ukulele, and voices (although these, sadly) were dubbed. 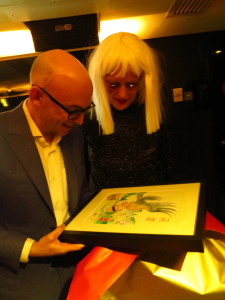 Frank admiring a beautiful painting by Alan complete with Flying Eagle, Honolulu and Jo and me singing away. Excellent art.

But don’t anyone else dare to leave, you hear? I’m getting sick of it! Sick, I say.

Another One Down: Ploughing Through the Theme Parks of Shenzhen | Happy Jellyfish

Another One Down: Ploughing Through the Theme Parks of Shenzhen 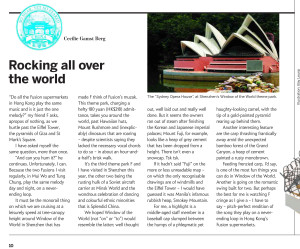 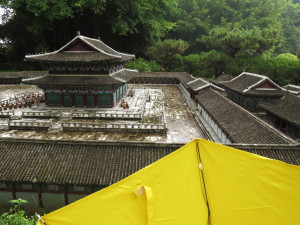 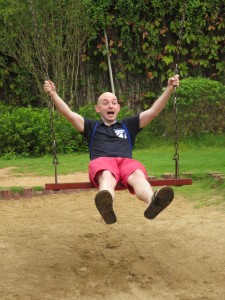 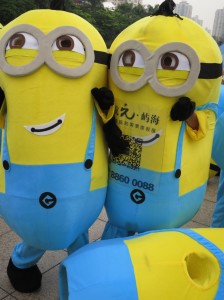