Back In The Filming Saddle! (Camera Dies During Filming of Mexican Wedding) | Happy Jellyfish

Back In The Filming Saddle! (Camera Dies During Filming of Mexican Wedding)

Woo-hooo. My last message was pretty depressed. I talked about how I have the least job satisfaction in the entire world, yea, even less than people whose job is warning people about the dangers of world jihad.

Two of these intrepid students are 飛鷹 (can be seen in all his splendour in the film above) and 五天, both British. And they’re coming here today to shoot a film! I’m looking forward to it with enormous force, for my camera has been out of commission for too, too long.

It died in Mexico during a wedding 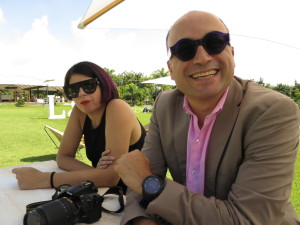 to which these two kind people, also students who really try to communicate in Cantonese, invited me.

But now it’s all repaired, the battery is charged and we’re ready to start shooting a new series called CantoNews, teaching basic Cantonese from the beginning. Watch this space!

I took up the banjo partly to understand what it’s like to learn something new, better to sympathise with my students. Now more than ever I see the importance of practise. I have been practising almost every day but not for hours and hours. If I had, the results wouldn’t be as meagre as above. BUT ten minutes a day is better than one hour every six days!

I can’t stress it often enough: If you want to speak passable Cantonese, you have to speak it every day. Every single day.

Last month I had lots of American visitors and here (in the film) are three of them. “We want to make films, we want to make films” they cried. All right, I thought, let’s start at the airport and jolly well continue throughout their stay.

Unfortunately it rained almost solidly for the two days they were here, and the wetlands scenes were shot in a few seconds. Cheers, the Beck Shoup gang! You did the best you could under the circumstances.

Be The Gwai! | Happy Jellyfish

The other day one of my students created a brilliant slogan. I was telling her about how local Chinese people think all Caucasians are complete idiots who can’t read numbers, don’t know what milk is (according to the podcast below, ElleX stood in front of the dairy section at her local supermarket wondering what to buy, when a helpful employee popped up at her elbow saying: This. Is. M-I-L-K.) and generally need help and advice to walk across a floor to reach an exit.

They are amazed and falling over themselves if you can utter 早晨，(jo san, morning) let alone string a whole sentence like 廁所喺邊度 (chi soh hai bin dou, where is the toilet) together.

So why do you have to be your normal age and native language abilities or nothing, when you speak Cantonese? Can’t you just BE THE GWAI? A total idiot from whom no one expects any brain activity at all? That way, even if you know three sentences or 52 random words in Cantonese, you’ll be treated like a mega-star and the most intelligent specimen in the world.

Be the 鬼！ It’s extremely liberating. Just ask any inmate in a loony bin.

So learn Cantonese this year! If you don’t have time to take lessons you can buy the entire language in two handy DVDs right here at this site:

Beautiful Day On “Dark” Side 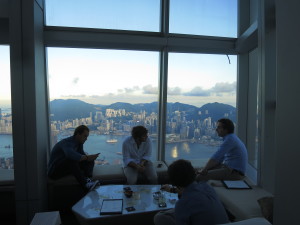 It’s so much fun to have friends visiting Hong Kong, especially when the day they arrive kicks off a week of unprecedented beautiful weather!

I shouldn’t say unprecedented; the weather was probably like this every day in the olden days. Yeah, so it’s hot – so what? I would really really really recommend that you get your arse over to the Ozone Bar on the 118th floor above “Kowloon” (Gau Long) Station for the most magnificent vista currently available from not a plane.

For me the most exciting thing was seeing both sides of Hong Kong Island simultaneously! I didn’t realise it was so narrow. 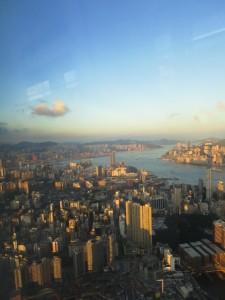 Only when the bill came did we realise that in that place (with, having the most beautiful view in Hong Kong, also strangely sports some of the worst interior decorating in the city) a pint of beer is $165. But hey! Definitely, definitely worth it. 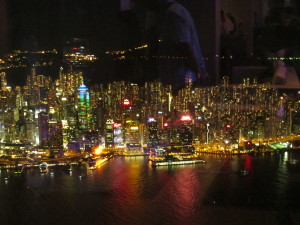 If your friends are threatening to visit, tell them to come NOW and go straight to Ozone Bar. (The Peak is good too but with too too many people queuing up for the cable car. Taxi is the way to go here.) 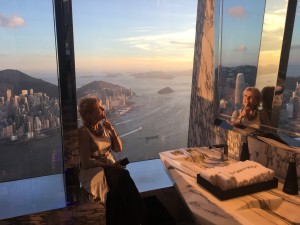