The Death of the Cantonese High Quarters Honolulu 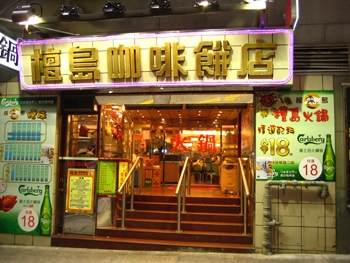 Honolulu Coffee and Cake Shop in Central, a place I have been conducting Cantonese (and, I admit, some Mandarin) lessons for almost ten years.

How many bright-eyed chickens have stumbled across her threshold, eager to learn Cantonese in a 'real Chinese' setting? How many thousands and thousands of dollars have we paid into her coffers, only to be tolerated at best by surly staff?

In the beginning I thought maybe it's because we're foreigners, but no. A quick check of Open Rice reveals that Honolulu is known for terrible service. Still, this is the way of many of Hong Kong's 'traditional' restaurants and it was kind of fun the twice a month or whatever we could get some member of the staff to smile. Two notable exceptions were Gam Tau (Gold Head) and Ah-Po, who always seemed to remember they were employed in a service industry. 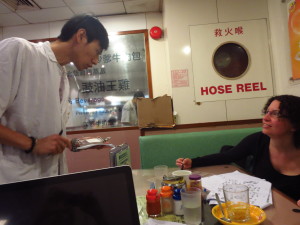 Ah-Fai (above) was also good the entire time, if quite aloof. The thing was I could understand the surliness too, as they worked from 05:00 to 23:00 or whatever and were paid the absolute minimum possible. Small wonder every dollar of 'tipsie' was eyed hungrily by staff. And that led to our downfall. I think. But I don't know for sure exactly what started off a several minute long screaming session from one of the women at the till, letting an incredible amount of abuse descend on ah-Po. Apparently he'd had the nerve to take the payment from a table I had left a few minutes earlier but around which my students were still sitting, and bring it across to the counter, about 1.5 metres away. This is not allowed in Honolulu. But why not tell ah-Po this?

No, evidently it was my fault, this woman implied, or should I say, screamed at top decibel as she came over and stood right next to my table. If I had had long hair, it would have blown backwards like an advert for Dove Shampoo at her tirade. We just sat there frozen in shock. "If you EVER let your students do that again, you'll never have to come back EVER!" was some of the more measured things she screamed at me.

Seeing I thought it's the company's responsibility to train the staff and not the customers, I followed her orders.

What a shame! I emailed the manager asking for an apology but got no answer.

But hey! We've found a new place. Tsui Wah in Wellington street. The first five customers I saw there were ex-Honolulu regulars...