I’ve just come back from another Russian lesson with the excellent Dimitri. People: You think Cantonese is difficult – try Russian. Every word, I mean noun, adjective, verb and adverb, has hundreds of different forms. Even numbers change wildly according to what comes after them. In Cantonese, dollar(s) have only one form: 蚊 (man) . In Russian there are three ways to say “ruble” depending on how many there are. In Cantonese, if you can count to ten and know the words for hundred, (百） thousand (千）and ten thousand (萬） you can basically count to as many millions as you want, using the same one-syllable words. In Russian, between 1 and 100 there are probably 50 different pronunciations with the number 40 suddenly taking off from the pack and having nothing to do with the number 4.

Then there are the genders of course, and every bloody word veering off to the left and right with only the first syllable (if you’re lucky) known to man. Endings, beginnings, things depending on whether there is one, four or more than five of the bloody thing … It’s like mathematics.

When I’m in the room with Dimitri I go into a kind of trance and can kind of communicate with him by remembering the first few syllables of words and mumbling the rest. When I stand on the pavement outside, shaking lightly and not knowing which direction to walk, I think: What was that all about? If you’d held a gun to my head I wouldn’t be able to remember what had gone on in that room three minutes ago.

So students of Canto: Embrace the Canto. It really is SO easy! When you know ten words, you actually know a hundred words. Whereas in Russian those words will be 1,500 different-sounding words which you have to memorise one by one. I’m just saying.

And the buffalo? Well, that’s a Russian bear with horns.

Now you can own both Cantonese – The Movie and Going Native in this special bundle. Take your Cantonese from complete beginner to an intermediate level without even trying! Let Happy Jellyfish Language Bureau take you on an adventure through all things Canto with some interesting places and characters thrown in along the way.

You have watched Cantonese – The Movie and feel more confident about your Canto. Now it's time to crank up the action! Going Native takes you from beginner to intermediate level – again without really trying!

Would you like to travel around China but are worried about your Mandarin being not up to scratch (or non-existent)?

Now you can get all the Mandarin words and expressions needed for getting around the Middle Kingdom in this handy video which covers train and bus travel, hotel stay, eating and drinking and other situations you might find yourself in when you, like us, are going to for example Hong Kong to Kazakhstan, by train…

“DID YOU KNOW THAT Cantonese has no word for YES or NO?

But… but how can this be? you're probably thinking. Without yes and no, how can you answer Yes/No questions? It's easy! Just download Cantonese – The Movie and all will be explained.

Everyone who has working tastebuds will surely agree that Sichuan food is the best of all food, not only in China but in the world. Sadly, many restaurants call themselves Sichuan without being the real thing. So why not avoid disappointment by learning to cook it for yourself? It's easy!

Cecilie eats her way across Americas Chinese restaurants speaking only Cantonese. If the staff don’t speak Cantonese then she leaves….unless she is really hungry.

Don’t Joke on the Stairs – The Movie

Cecilie visits China and looks at the fun side of life. More information soon.

Find out about the delicacies of Yam Cha.

That’s right, to sympathise with my clients’ plight and understand once again what it is to learn a language from scratch, I’ve decided to learn Russian.

That and the fact that I’m going to Kazakhstan in the summer.

I’ve only had one lesson so far, but it seems pretty straight forward – everything is different from English and with lots more consonants. And I have to say, to bang my own drum a little here, comparing my Cantonese course with other courses, the one I’m taking live and the CD Berlitz one I bought at Dymocks, I have to say my Cantonese course is holding up quite well.

Like, when you arrive in Kazakhstan for example – is the most important thing to be able to say “I’m a doctor, are you an actor?” Of course, if you accidentally had your arm cut off or something, you’d want to be able to ask bystanders if they were a doctor, but apart from that …

In the Berlitz course, after hello and thank you, comes “I don’t speak Russian.” So … if you can say that in fluent Russian, wouldn’t that just confuse people? Hello, I’m not Russian, I’m a tourist (you don’t say!) … then straight to transport and of course professions.

I’m sure Berlitz methods are tried and tested and with millions of fans, but personally I’ve never arrived in a new country and felt an urgent need to ask people if they are an actress, or tell them that I’m a tourist. They kind of get that.

Now my Cantonese course, on the other hand, starts with being able to order beer. And other drinks! And then onto food. I like my course. It also contains 63% less violence than other courses.

I think you should take it – today!!!

你有無睇醫生？ Have you seen a doctor? | Happy Jellyfish

你有無睇醫生？ Have you seen a doctor? 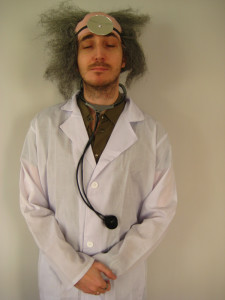 There’s been a lot of flu and crap floating around in Hong Kong recently – even I got it! But this wasn’t your common or garden swine flu 豬流感 (zhyu lao gam) – this was at least shark flu! 鯊魚流感 (sa yü lao gam)

It was highly unpleasant, so unfair and deeply irritating. But it made me remember this film I made a few years ago. From it you can pick up a highly useful piece of conversation: Have you seen a doctor?

Cough once, have a broken nail or split ends – off to the emergency ward with you! 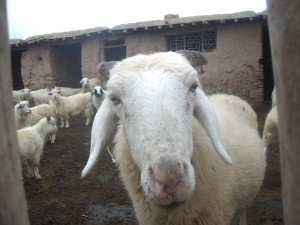 This is one of the reasons why I love Cantonese: 咩! (Meeh, wot? or what kind of…)

My theory: It started out as 乜嘢 (mat yeh, what thing. As in: 你飲乜嘢呀？Lei yam mat yeh ah? You drink what thing ah – what are you drinking?). A good Cantonese expression that Mandohooligans can’t understand, in speech or writing. And then (again this is my theory but I think a good’n:) it slowly compressed into one word: Meh (咩）taking the beginning from the mat and the end from the yeh.

And then MEH took on its own life, meaning ‘what kind of’ as in 你飲咩啤酒呀? (Lei yam meh beh jau ah? You drink what kind of beer?) But it created a conundrum. How to write it? Normally in Cantonese if a word doesn’t have its own character you just take a word that sounds identical or similar and slap a ‘mouth’ character (口）on it. Like 呀 (ah) that comes from the word 牙 (tooth). But there is no ‘meh’ sound in Cantonese. What did they do? Wrote it as ‘the sound of a goat’! (Or sheep.) 咩(meeeeeeh!) Goat falling off a mountain!

By the way, the above photo was taken on an excellent day in Inner Mongolia, hitch-hiking through the wilderness. 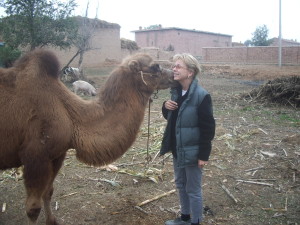