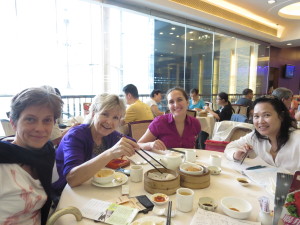 I’ve just travelled 25 minutes there and 25 back just to eat. What, didn’t I have perfectly good ingredients for Sichuan food in my fridge? you ask. Yes, of course. But no matter how good and life-giving those chillies are, every so often I’m overcome with an intense longing for drinking tea – 飲茶 (yam cha). Or rather, eating dim sum. (點心) 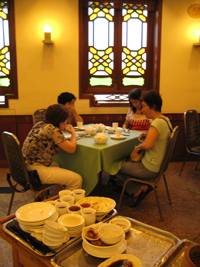 Because, although it’s called Drink Tea, it’s all about the food. Those alluring little packets of goodness arriving three or four together in a basket or on a plate – they call, nay, scream out, to me! I feel the need for a session about every five days or so. What is it that creates the addiction? I’ve always avoided finding out exactly what’s in dim sum but I suspect there’s rather a lot of lard… 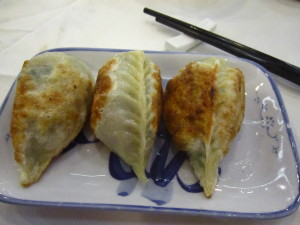 Testicles? No, they are 煎韭菜餃(chin gau choy gau – pan-fried chive dumplings. With pork, hello!). For some reason these are much more common in the mainland. Perhaps HK people are more squeamish when it comes to biting into a distinctly testicle-like object? When they do appear on the menu in Hong Kong they tend to be called Japanese dumplings and be considerably smaller than in the mainland. 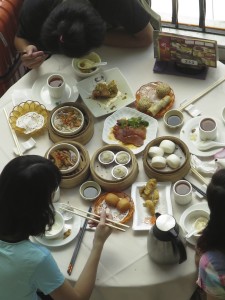 Ah, 飲茶(yam cha)! It’s so civilised! If there’s something you don’t like, you can just order another basket, and another, and another. You’re not stuck with one big dish all to yourself that you have to sit and chew and chew and discreetly spit into your handbag if you mis-order. 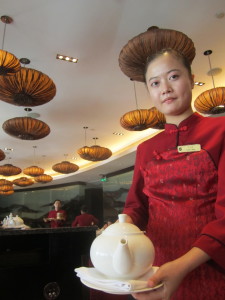 I’d experiment with various forms of tea though, if I were you. If you’re Caucasian, the staff will plonk down jasmine tea on your table no matter whet, instead of asking 你飲咩茶呀？(Lei yam meh cha ah – you drink what kind of tea ah) like they do with Asians. Not fair! And jasmine tastes like perfume!

If you want to find out more about Yam Cha, teas and dim sum, take a crash course in Dim Summing with Happy Jellyfish People’s Democratic Language Bureau. It’s clean, convenient and almost without violence.

Yes I know I’ve done 隻 （jek) before, but then I saw this 水牛，seoi ao, yesterday morning, and was lost in classifier-ation once again.
It seems that classifiers are simplifying and that people often use 個, goh, (piece) the most common classifier, for more and more things where other classifiers would be more appropriate. Therefore, if you say 一個水牛 yat goh seoi ao, instead of 一隻水牛 yat jek seoi ao, you won’t get taken outside and shot or anything.

It’s just that using the right classifier is more elegant. So 隻 is used for mammals, round things, boats, things of which there are two, like feet, shoes … and of course 三隻手 saam jek sao (three hands) – a pickpocket!

New Book About China and Cantonese

Did you know that I have just published my second book, Don’t Joke on the Stairs, on Blacksmith Book publishing house.

It is about how much fun and laughter, surrealism and weirdness you can find in China and Hong Kong, but also to a large degree about how to learn Cantonese and why the locals put up such a fight against foreigners trying to learn it. The latest reviewer said “Move over Paul Theroux” so I must have done something right.

Check out the trailer on my YouTube channel Cantocourse:

Taken into consideration that I am still in awe of the fact that it's possible to flip a switch and the light comes on, imagine my wonderment when I first beheld an electronic English/Chinese (and vice versa) dictionary. Not only beheld but be-heard! Yes when I prodded it with a little stick, out came a tiny little voice uttering, with a Hong Kong/American accent: "Bollocks". What a singular piece of machinery! It had many other functions such as mahjong, maps of every city in the world and some kind of valet service, but it was the dictionary that fascinated me most. How was it possible to cram that many words - with voices! – into that little space?

When I got an email from a Mr. Wong asking me to translate 20 000 English words into Norwegian for an electronic dictionary, I was therefore delighted. Now I would get to see the inside of an electronic dictionary and also record the words. I would be the little voice saying "bollocks" with a Norwegian accent! 20 000 word would be a breeze, Mr. Wong assured me. English word "overcoat", Norwegian word "øverkøøt", that kind of thing. A couple of weeks of leisurely typing, plain sailing. Or it would have been, I quickly found, if the English words had been normal English words like "gardening", "slapper" or "foreign ministry". Those words or any like them were in fact not featured at all. No, "ineluctable", "impecunious", "arthropod", "extemporaneous", "fimble-famble" and "emetic" were the order of the day, not to mention "claymore"(a Scottish two-edged sword).

Though the above are surely shining examples of English at its best, putting once and for all to rest the debate about whether locals' standard of the language is slipping, I must say I was often puzzled as I worked my way down the list. Nay, baffled. The words were indeed English words; the spelling was fineso why did I find myself frequently scurrying to the dictionary to see if they existed? Why the nagging doubt? I realise now it was all to do with the hyphens. I stood faltering before "crisis-afflicted", "heart-searching", "memory-resident" and "intellectual-historical", willing them to have meaning. When I reached "thought-free" I started wondering if there isn't perhaps a parallel or other universe where these words are proudly bandied about? Yes, Mr. Wong could assure me in his soothing email voice, this universe. They are all common English words, widely used.
So I started doubting myself. Had I really lived this long without using the common word "memory-resident" even once?

The project went on.and on. The two weeks soon passed and became three and four. Even if I worked like a maniac without rest or food I could only put away a thousand words a day at the most. In addition I still had my day job (teaching), which was suffering not a little because constantly having to think what "crisis-like" and "wine-adultering" meant was robbing me of my power of speech.

Despite the sleepless night and my speech turning to gibberish, in many ways the translation was an edifying experience, not least because it introduced me to the world of adverbs in a big way. According to the creators of the database, not only can any two words when joined with a hyphen become a word in its own right, but any word can be made into an adverb, simply by adding the letters -ly. "Town-planningly" came out as a clear favourite here, but there was also "under-challengedly", "high-prioritily", and of course the adverbial form of "intellectual-history" namely "intellectual-historically". And let's not forget the description of how people like Arnold Schwarzenegger walk through life: "broad-shoulderedly".

Perhaps anticipating puzzlement in the casual observer of these words, the creators of the database had added explanations to facilitate a speedier translation. These came in immensely helpful. How else would I have guessed that "Couldn't care less" actually means "was unable to be careless"? Or that a "beagle" is a "church officer or assistant"? Thus I was relieved to find that "town-planningly" really does have a meaning, and that it is "in a way of well-planning with respect to town development", and that "crisis-like" means "similar to a crisis". And "tendency-wise", which at first seemed downright daunting, at once became clear when I looked at the explanation: "Showing sound judgment and keen perception in the light of tendency".

I slogged on, word for awe-inspiring word. My social life went to the dogs as I worked every day from 5.30 am to well after midnight, staggering dizzily through a world of English I had no idea existed. I only surfaced briefly on Saturdays to tell my friends about the latest new English words like "reflex-like" (that likes the reflex), "dance-like" (fond of dance) "deadliness" (no longer alive) and "deafening" (turn a deaf ear to). I found out that the real meaning of "big-boned" is actually skinny, with its inevitable adverb, "big-bonedly" meaning "in skinniness". For the foreign student of English it will come as some relief to learn that both "forbidden" and "forbidding" mean "not allowed". Yes! I've always said English has too many words anyway. Why not pare them down a little?

After five weeks of non-stop writing, or rather, finding words I didn't know existed, I found myself in "half-relief" (semi-pain) and it sometimes felt like I'd been "mangled"(cut without permission) but I got a certain "enjoyment" (experiencing with joy) out of it as well. However for most of the time I felt "suicide-prone" (tending to kill oneself).

The good thing is, in Norwegian adjectives and adverbs are the same, so I was able to translate "high-prioritily" into just "high priority" - høy prioritet. This was much appreciated by Mr. Wong, who found my reluctance to translate non-existing words exasperating. He strongly indicated that if I "felt" they didn't exist, I could just make them up; after all, that's what the creators of the database had done. So next time you're puzzled by hard-to-fathom entries in your high-technologically-challengedly dictionary, rest-assuredly it's only been-translated by people like-me-ly.

Perhaps you’ve made some new year resolutions this year, and broken them already. Here is one that won’t hurt, but on the contrary will enrich you no end for the decades to come: Decide that this is the year in which you’ll learn Cantonese!

Today I had a student who told me full of pride that she had told a taxi driver where to go in Cantonese and: (Here she made a surprised face) He went there!

Well, why wouldn’t he? She talked to him in his own language and he understood it. What’s so strange about that?

As a Cantonese teacher, I’ve found the biggest obstacle facing most of my students is this: They don’t really think they can actually learn this language. Years of conditioning with people (Chinese) telling them: It’s too difficult for you, you can never learn it, you should learn Mandarin instead etc. have more power over their thinking than me, a person they pay to instruct them, saying: It’s just a language. If I can learn it, anybody can learn it.

It’s a strange thing. If you’re taking tennis lessons from someone, you won’t keep saying to your tennis instructor: But everybody tells me I should learn the piano instead! Tennis is too difficult for me. Are there any good books I can learn tennis from instead, or possibly chess?
No, you grab the racket and try to do what the instructor tells you. And after a few weeks, you can play tennis.

And then you practise for a few months until you become a good tennis player. You take every opportunity to play tennis, to the point where you actually play tennis with other people!

Cantonese is just a language. Anybody can learn it, provided they have the two things necessary: A head and … yeah. That’s the only thing you need. A head with ears and a mouth. Eyes help, but ears and mouth are essential. So why not give it a go? You live in Hong Kong, you want to communicate with locals in their own language – make 2010 your big I learnt Cantonese so screw you, naysayers! year.

(The photos above are all of people who a few months ago couldn’t speak a word of Cantonese but who now can. They just went ahead and did it.)